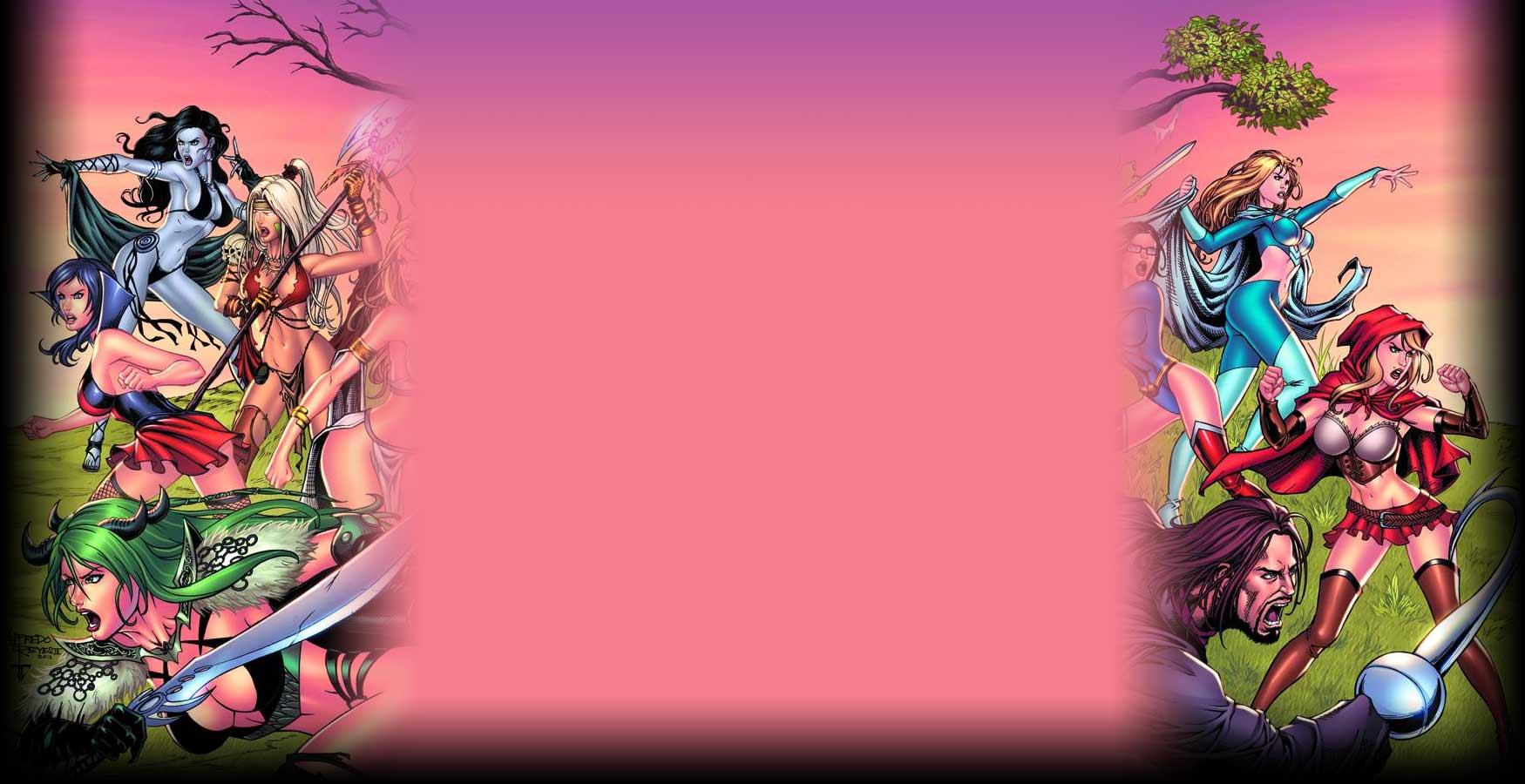 They are all on this site in some place or another. If you just want a list of stuff since February, here's two links that should cover everything:

That covers everything that is out from November of last year on. I am using that list to make sure that I make pages fro everything. As you might see from the red lines, there are a few not made yet, but the names are there.

That is a list of all upcoming issues. It does not currently include the stuff announced this month, but I will try to get on that soon. It has a lot more red links, because there are a bunch of pages still needed. Names and approximate prices are there which should help.

Personally, my comic book store has been told if it says Grimm Fairy Tales and it is from Zenescope, they are to order it for me. I get some of the ones that aren't Grimm Fairy Tale, such as The Jungle Book and Charmed (whenever they manage to start making more issues) and Salem's Daughter (if they ever get any more) and Sinbad (can we sense the pattern here). At least one of my favorite Zenescope characters, Nathan Cross, is getting some comic time.

In that case. I didn't read comics until June 2010. I had glanced through some, but I always got so confused, because I had no clue who anyone was and there was a million things going on at once with several different groups of characters. In 2009, I heard that some comic book company was doing a continuation of one of my TV shows in comic book form. At first I didn't really believe it, but some time in early 2010 it actually hit me that they really where going to do this, so I contacted a friend at work who read comic books and asked him where to buy comic books and he told me the name of the comic book store he bought from.

I made a subscription to the Charmed comics and basically ignored all other comic books for about a year and a half. In the mean time they had adds for their different comics, most of which I ignored. What actually caught my attention was a preview of one of their, at the time, newer comics, Salem's Daughter. At some point in 2011 (I think) this one comic book site had a bunch of stuff from Zenescope on sale. I bought a whole bunch just to check it out. And yes, I did need a whole bunch to get an opinion, because there is rarely one individual comic book that interests me enough for me to get an opinion worth anything. The Salem's Daughter One-Shot for the Dream Eater Saga was an exception. I bought it at the same time entirely for the signature on it, but read it out of curiosity and I was hooked. This arrived (if I recall correctly) before the others. With that one comic I was hooked on Salem's Daughter the same one that had me curious earlier from the preview.

One of the things I had bought in the group of comics was a hardcover of Neverland, which contained issues 0-7 plus some bonus stuff. By the end of it, I was hooked on that, too.

Charmed is still my favorite comic, Zenescope or not. Salem's Daughter is number two with Neverland in the number three spot and Sinbad in the number four slot. Wonderland comes fifth. Thanks to someone on another site, I now read the Smallville comics (started at the beginning with that, although I have yet to see the series) and I have just started reading Aarow a couple of months ago, both by DC. Top Cow hooked me with a comic they are not currently making new issues for, Hunter Killer, and I have recently started reading Cyberforce after reading a crossover between the two, but I'm not as interested as I am in Hunter Killer. And Marvel has me with my favorite X-Man's current series of comics, Gambit.

Oh, and there's some comic by Gerard Way called Umbrella Academy that has my interest and I collect the volumes of any Supernatural comics that come out, mostly because the issues are so spread out that I never know when they are coming out, so I find out way after the fact.

Additional facts about my comic buying: I hate the art in the Supernatural comics for the most part, but since I love Dean and Sam I read them anyway. Umbrella Academy definitely didn't win me with its art either, although I will take that over the art in some of the Supernatural comics. I like some of the other art better, but some of it is downright awful (in my opinion). Although I have bought a couple of comics for the cover, I will never buy a series for a cover and the likelyhood that the cover art of every issue interests me enough to buy a full series, is rather low. For me (and I know for other people this isn't true) it comes down to this: I read Supernatural for the same reason I watch it on TV, Dean and Sam. I read Charmed for the same reason I watched it on TV, the sisters and their close friends and family (It does almost always have decent to excellent artwork). I read Salem's Daughter for Anna and Braden (although the art for that one is usually pretty good). I read Neverland for Nathan...mostly, some for Belle and some for Pan, because he is insane and that is rather interesting to watch (I do like the other characters and the art is generally pretty good). I read Sinbad for Sinbad and his crew (There is a lot of art in that one that is difficult and then there is some that is amazing). I read Wonderland for Calie (because if you don't read Wonderland for Calie, there is a ton of Wonderland that just isn't for reading, because it's mostly about Calie) and for Johnny (because he definitely caught my attention even if it was just to creep me out). I read Grimm Fairy Tales and it's various spin-offs for Sela and Belinda and Baba Yaga and Blake and Bolder and Samantha and Britney. For me it's all about the characters first, stories second, and as long as I can read it (letterers rock, see below) and it makes sense in the order they put it, everything else takes a backseat for me. Yes, I want it to look good. Yes, I want it to be out when it says it will. Yes, I will get frustrated when it doesn't. Yes, it drives me nuts that 22 pages barely tells a story in some cases, but I'm getting used to that. Yes, it drives me nuts that I don't know when/if any of my favorite Zenescope series will be getting more issues (with the exception of Wonderland which is in fifth place, so I'm more interested in what's up with the four above that).

And I want to thank Jim Campbell for being amazing, because without him and other letterers on these comics that I read, I shudder to think what the letters would look like. I've seen some I couldn't read.

I have no idea what the main admin thinks of this, but my favorite nonCharmed character within the comic published by Zenescope is Nathan Cross followed closely by Braden Cole and then Sinbad. Having been a Charmed fan much longer than I have been a Zenescope fan, I feel it unfair to include the characters from Charmed in such a question and besides, my favorite Charmed character (Andy Trudeau) has only shown up in a flashback in the comics, so my opinion of him is based entirely off the TV show.

As to why, I'm not sure. I like the adversity Nathan has had to face to get where he is at. I enjoy his personality and the fire power coming out of his hand is pretty cool, but not a deal breaker. With Braden, I love how he is helping Anna, protecting her when needed, and standing back when she is the one who needs to be in charge of the situation. And Sinbad cracks me up, but he gets some major tick marks against him for his womanizing ways. I love how much he cares for his crew and the way he doesn't look down on them if he knows more than they do and how he listens when they know more than he does. He's a good leader...usually. And he's not leaving anyone behind. Again, Andy won me over in the TV series, so there really isn't anything to say about how he behaves in the comics unless you want the fact that he was there for Prue when she arrived in the Beyond, but it sounds like he had a hard time of it, especially with how she was suffering being seperating from her sisters.

Out of curiosity, what kind of research topic are you researching that involves Zenescope?