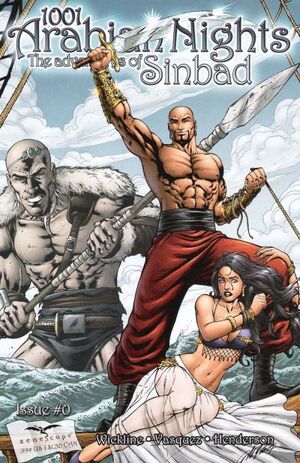 On the Isle of Kish, I am a hero. In the city of Abu Dhabi, I am a thief. In Ganaveh a princess longingly awaits my return. And in Baghdad... I am to be killed on sight. My friends call me a sailor. My enemies call me a pirate. My women call me a god but you may call me Sinbad.

Orland is preparing his ship to set sail. He is directing his guards, crew and those he calls "the freaks" to get the cargo on board. As they walk up the gangplank, Ashcroft offers to help Samelia with her load. She refuses, not wanting to get them in trouble. The rest of the group walks up in relative silence. As one crew member reaches Orland, Orland tells him to "get the freaks into their cages" as soon as the cargo is secure.

Meanwhile, the Old Man predicts that "the time is at hand", starting "with a single misstep". He has only just said this when Samelia trips and falls, dropping her load likely breaking some of it. Ashcroft offers to help her, but before she can even finish protesting, Orland shoves him out of the way and raises his whip to strike Samelia.

Things don't go as Orland plans when a hand reaches out and grabs the end of the whip. Standing on the edge of the boat with a sword in one hand and the end of the whip in the other, is a man with a cocky grin and even more cocky words. Orland demands to know who he is and why he's on Orland's ship, and then in the next breath he orders his men to kill the man.

More amused than anything else, the man wonders if he should answer before or after they kill him, but of course he doesn't plan to die and he doesn't wait for an answer before he begins his own answer. He alternates between saying something good about himself that is said in one place and something bad that is said about himself in another, before finally ending with, "but you may call me Sinbad." By that point his already dispatched most of the guards and the last one freaks out upon hearing his name and jumps overboard.

That leaves Orland without his guards to face Sinbad. He is furious, but manages to ask what Sinbad wants. When Sinbad tells him he just wants the "old man in your carnival ... that can see things from beyond this world." Orland is even more furious and throws the Old Man at Sinbad.

The Old Man tries to warn Sinbad, but before he can one of the "freaks", later identified as Shon'Du picks Sinbad up and throws him against the door of the captain's cabin. As he does so, he apologizes, but Sinbad doesn't really believe him. Next, Vu, another of the "freaks" throws a spear at Sinbad, and Pots hits him with one of his pots. Sinbad throws Pots into Vu, knocking them both down. Samelia casts some sort of spell on Sinbad and Shon'Du grabs him, again. This time he manages to subdue him, possibly because of Samelia's spell.

Then, Orland orders a stunned Samelia to kill Sinbad. She begs him not to make her a murderer, but he repeats the order more emphatically. As Orland directs Samelia to do his bidding, Aschcroft takes an item off a belt his wears across his body from his shoulder to his hip. As Samelia begins the spell with tears streaming down her face, Ashcroft throws the objects with prefect precision, hitting a gem attached to Orland's "hat" and knocking it to the ground where Sinbad picks it up.

Without waiting for Sinbad to decide if he wants to give the gem back to Orland, Vu runs Orland through with his spear and a delighted Shon'Du throws Orland's body overboard. The Old Man, Vu, Samelia, Ashcroft, Sinbad, Pots, and the final "freak", a cloaked man who somehow managed to not show up in the battle watch as Orland's body sinks below the surface.

Sinbad takes a look at the gem he took from Orland and the Old Man explains that the gem controls anyone wearing the smaller gems. Sinbad doesn't have to think long before smashing the gem and giving the "freaks" their freedom. He values his own freedom too much to take theirs. He does decide he's more then willing to take Orland's ship and asks the Old Man if he would be willing to stay a while to help Sinbad. When he tells the others they are free to go home, Ashcroft tells him they have no where to go. This seems to be the group opinion for Sinbad takes it at that and admits he could use a crew, offering them the chance to be that crew as he gets ready to set sail.

Retrieved from "https://zenescopeentertainment.fandom.com/wiki/1001_Arabian_Nights:_The_Adventures_of_Sinbad_Vol_1_0?oldid=11932"
Community content is available under CC-BY-SA unless otherwise noted.