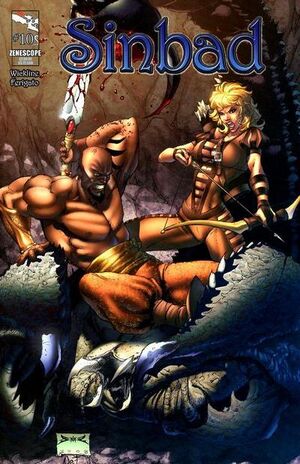 Appearing in "Sinbad and the City of the Dead: Part 3"Edit

Synopsis for "Sinbad and the City of the Dead: Part 3"Edit

Sinbad and his crew have survived the deep fall into the Endless Chasm. At the bottom they find what theyve been searching for: The lost City of the Dead! They also find giant man eating scorpions and undead skeleton warriors! And they have even entered the city yet! The adventure ramps into high gear as Sinbad and his crew move closer to finding the second piece of the Jericho Visor, the crown of Annubis. With cover by superstar artist Joe Benitez.

Retrieved from "https://zenescopeentertainment.fandom.com/wiki/1001_Arabian_Nights:_The_Adventures_of_Sinbad_Vol_1_10?oldid=13736"
Community content is available under CC-BY-SA unless otherwise noted.