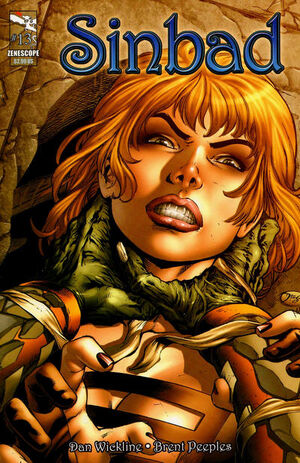 Appearing in "Sinbad and the City of the Dead: Part 6"Edit

Synopsis for "Sinbad and the City of the Dead: Part 6"Edit

Buried beneath the desert sands the mummy king Terrae Motus wears the crown of Annubis and rules the lost City of the Dead. Sinbad has come to the city, hoping to claim the crown which is one of the artifacts that make up the mysterious and powerful Jericho Visor that he needs to clear his name. But Terrae Motus has other plans for the captain and his crew and he has no intention of letting them take his crown or live to see the surface again! Dont miss this exciting and action packed conclusion to the City of the Dead story arc!!

Retrieved from "https://zenescopeentertainment.fandom.com/wiki/1001_Arabian_Nights:_The_Adventures_of_Sinbad_Vol_1_13?oldid=12069"
Community content is available under CC-BY-SA unless otherwise noted.