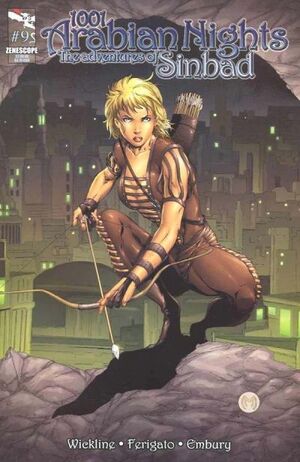 Appearing in "Sinbad and the City of the Dead: Part 2"Edit

Synopsis for "Sinbad and the City of the Dead: Part 2"Edit

The adventure continues! The search for the City of the Dead heats up as Sinbad and his band of loyal followers travel deep into the heart of Egypt to find the Crown of Anubis, the second piece of the Jericho Visor. Adding to the intrigue is Sinbads decision to place his trust in the mysterious tracker Osmium, a woman from his past and her wolfhound Zawj. As always, things are never as they appear for Sinbad and his men as the deadly desert looks to claim more victims and retain its secrets.

Retrieved from "https://zenescopeentertainment.fandom.com/wiki/1001_Arabian_Nights:_The_Adventures_of_Sinbad_Vol_1_9?oldid=10334"
Community content is available under CC-BY-SA unless otherwise noted.