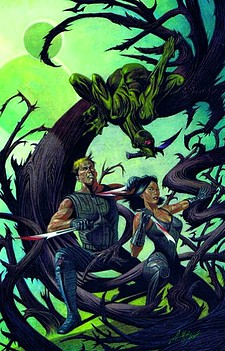 The Epic Battle of Agon is here! Earth representatives in the interplanetary gladiatorial battle travel to an alien world where the brutal competition takes place. Alien species from across the galaxy prepare face each other in a battle to the death where only on planet can survive. Earth's hero's search their team for a leader who can help them win the deadly battles ahead as they get ready to fight for the survival of not only our planet, but the entire human race as well. MATURE THEMES

Retrieved from "https://zenescopeentertainment.fandom.com/wiki/Agon_Vol_1_2?oldid=18840"
Community content is available under CC-BY-SA unless otherwise noted.