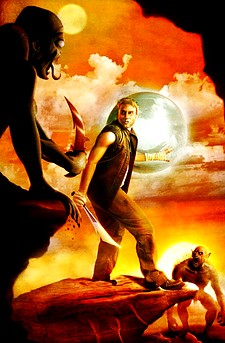 As the epic and bloody battle between different planet's best warriors continues in a distant world, one team finds that the price for losing is nothing short of horrific as its warriors are forced to watch as their own race is brutally massacred by the hierarchy. Meanwhile the remaining participants must prepare for yet another battle on a strange and dangerous desert terrain while the human team finds that it might be at a disadvantage this time around. And one team member realizes the sacrifice that she must make to keep their hope of survival alive.

Retrieved from "https://zenescopeentertainment.fandom.com/wiki/Agon_Vol_1_3?oldid=12500"
Community content is available under CC-BY-SA unless otherwise noted.