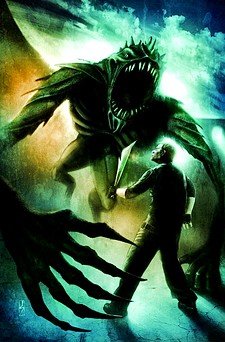 The final battle is here! Seth has thrown down the gauntlet. Earth joins forces with the remaining aliens to face their greatest and most dangerous challenge yet, a fight to the death against the hierarchy itself. The newly formed alliance must defeat the physically and mentally superior Ryke and his minions with everything at stake... Win and save trillions of lives; lose and the end of mankind is imminent. Worlds will watch as life itself hangs in the balance. Do not miss the shocking and awe-inspiring conclusion to Agon!

Retrieved from "https://zenescopeentertainment.fandom.com/wiki/Agon_Vol_1_5?oldid=12503"
Community content is available under CC-BY-SA unless otherwise noted.