Alexi is a seer who has known Cole for some time. The specific amount of time is as yet unknown. She now appears to be working with Rennek.

Alexi showed delight at seeing Cole come to visit her. She seemed to be flirting with him. Though he refused to tell her what he was looking for she implied that she knew especially when she told him that he would find what he was looking for in the place of her namesake. When Cole left, she was met by Rennek who wanted to know why it took so long for Cole to come to her. She told him that she wasn't surprised, because she was about the last person he'd come to. She then asked him if he was done with the Jewel of Orthon. He wasn't and told her he had one more thing he wanted to do. 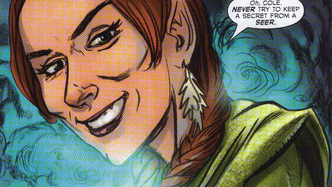 The Heavens Can Wait
Community content is available under CC-BY-SA unless otherwise noted.
Advertisement