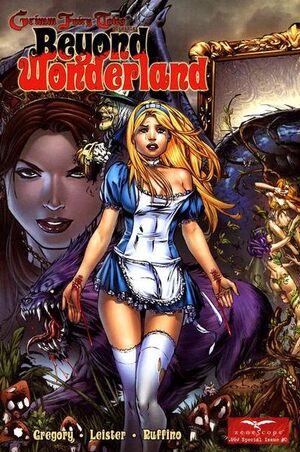 Once upon a time my name was Carroll Ann Liddle. I had a normal life with normal friends and normal problems. But that was before the rabbit hole. That was before Wonderland. Now my life is anything but normal.

The much anticipated sequel to Zenescope's instant hit Return To Wonderland has finally arrived! It's been six months since Calie Liddle escaped the hell that is Wonderland. Now she is living a new life in a new city under a new identity. But something from beyond this world is out there, watching, waiting and scheming for a chance to take back what it wants. And Calie can feel it closing in on her. Wonderland is coming to the Big Apple and only one girl will be able to stop terror that it brings. Features two covers shipping in a 50/50 ratio.

Daniel Leister is listed as Dan Leister in this comic.

Retrieved from "https://zenescopeentertainment.fandom.com/wiki/Beyond_Wonderland_Vol_1_0?oldid=14451"
Community content is available under CC-BY-SA unless otherwise noted.