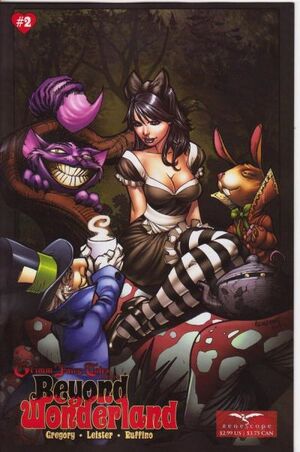 Calie Liddle is still trying to adjust to her new life in the big city. But her new job and new friends hang by a perilous thread. Wonderland is closing in around her, and she is more alone in a city of millions than she ever expected, being watched from afar by all-too-familiar eyes. Meanwhile, her brother, Johnny, adapts to his new realm, the same place his own sister sent him to months earlier!

Interior penciler, Daniel Leister, is credited as Dan Leister in this issue.

Retrieved from "https://zenescopeentertainment.fandom.com/wiki/Beyond_Wonderland_Vol_1_2?oldid=14449"
Community content is available under CC-BY-SA unless otherwise noted.