Billie is a witch and for a while she was a charge of Paige's.

Billie Jenkins was a young witch just coming into her powers when she first met Paige Matthews, her whitelighter, disguised as Jo Bennett. She was quick to figure out Paige's secret and eager to learn from the famous Charmed Ones. Over the course of the next couple of months, she tried to learn from them, sometimes to everyones detriment, sometimes successfully.

She was able to reconnect with her parents when she learned that they had been looking for her missing sister, Christy for all these years. With the help of the Charmed Ones and some new found powers, she was able to locate and rescue Christy. At first, Christy was extremely awkward, but she soon got used to her new situation and started trying to bond with her sister. What Billie didn't know was that Christy was trying to manipulate her and ultimately combine forces with her to destroy the Charmed Ones.

When a battle did ensue with the help of using Wyatt Halliwell to access the Hollow, Billie barely made it through and Christy died. When time was turned back and Piper Halliwell, with the help of her grandmother and mom from the past, stopped the battle from happening then.

Billie followed her sister out, but soon left her when it became clear that Christy was still out for blood. Though she didn't like it, the blinders were slowly coming off. She returned to the Charmed Ones, hoping they could help her save Christy from herself, but, in the end, when Christy attacked, Billie reflected back her attack and killed Christy.

"Billie Jenkins was a protege of The Charmed Ones and aided in the fight against evil while they were in hiding. She continued to train with the sisters after their existence was revealed to the world and became a strong force for good. Billie turned to the side of evil after she reunited with her long lost sister, Christy, who had been kidnapped years earlier and turned by demons. Together, Billie and Christy became the Ultimate Power fighting for the side of evil against The Charmed Ones. In the end, Billie saw the truth and came back to the side of good, but her sister died when she refused to give up the fight."

When Piper suggests getting Billie to help, Paige tells her that she already has Billie busy on the East Coast looking out for Darryl and his family. They also mention that Billie has been in LA.

Billie is one of the magical beings that Paige collects a piece of magic from in order to make the potion to fight against the Source. When Paige arrives, Billie asks her if she can help in any other way. Paige refuses, not wanting to put her in additional danger.

Prue told Cole that if it hadn't been for her connection to her sisters holding them back, Billie and her sister, Christy wouldn't have been an issue. 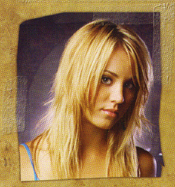