Bree is the daughter of Senator Holcombe. She is also the wife of Mitchell Coopersmith, a distant relative of Coop's.

Bree told her fiance, Mitchell, that he was forbidden from having a cake shaped like the Old Coopersmith Mine at their wedding. When he decided to have one made for their rehearsal dinner, she found that an acceptable alternative. She agreed that the cake was ugly, but said that if it was important to Mitchell, she loved it.

Later at their wedding, Bree was confused with the turmoil going on with Mitchell and his family. She ran out in tears, but was convinced to return when Coop had a pep talk with her and used his cupid magic on her. Coop figured it was okay to use his magic on Bree even after learning he shouldn't have used it on Mitchell since Bree wasn't actually part of the family yet.

She went back to see Mitchell and they agreed that despite everything that happened they wanted to be married and proceeded with their wedding.

"It's the ugliest thing I've ever seen. I love it!" - Cupid's Harrow 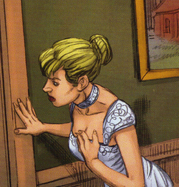