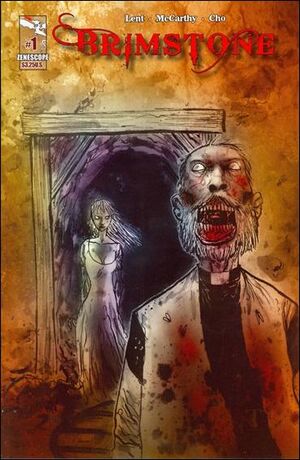 With his dying breath, an Indian Shaman unleashes an ancient curse upon his murderers, the miners of Brimstone, and the richest gold stake ever found in the High Sierras. A week later, the town is overrun and its communication lines cut. With all the honest men fighting the Civil War, the desperate mining investors put together a collection of outlaws, killers and thieves to re-take Brimstone ... by any means necessary. Led by 'The Viper,' a brooding gunslinger whose brutal exploits are the stuff of Western legend, the vicious posse finds the bullet-ridden town littered with dismembered corpses but its gold stores untouched. In Brimstone, the most feared men in the West have finally found the very heart of fear.

Retrieved from "https://zenescopeentertainment.fandom.com/wiki/Brimstone_Vol_1_1?oldid=18875"
Community content is available under CC-BY-SA unless otherwise noted.