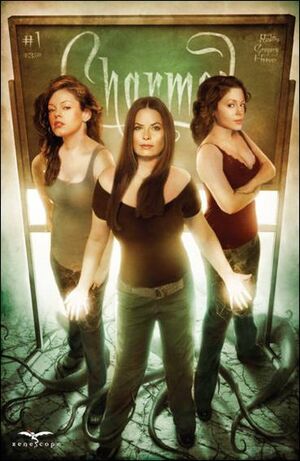 The Girls are back in town! The Charmed ones return in this brand new fantasy series from Zenescope that picks up where the series left off. Claiming their victory in the battle against evil, Piper, Phoebe, and Paige were free to settle into the future with their husbands and children, destined to live out the happily ever after they had so rightfully earned...or so they thought.

Retrieved from "https://zenescopeentertainment.fandom.com/wiki/Charmed_Vol_1_1?oldid=10358"
Community content is available under CC-BY-SA unless otherwise noted.