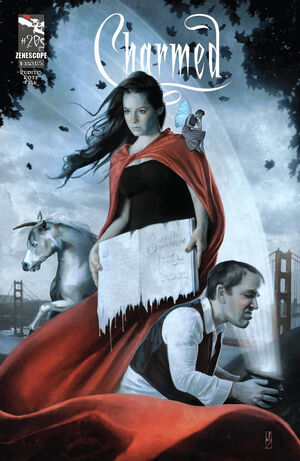 Appearing in "The Old Witcheroo"Edit

Synopsis for "The Old Witcheroo"Edit

Magical beings run amuck in the streets sending the powerless into hiding. Cut off from the Elders, the Angels of Destiny, and much of the Magical Community, there is no one to turn to for help. All hope seems lost in a world in which The Charmed Ones are no longer Charmed.

Retrieved from "https://zenescopeentertainment.fandom.com/wiki/Charmed_Vol_1_20?oldid=10459"
Community content is available under CC-BY-SA unless otherwise noted.