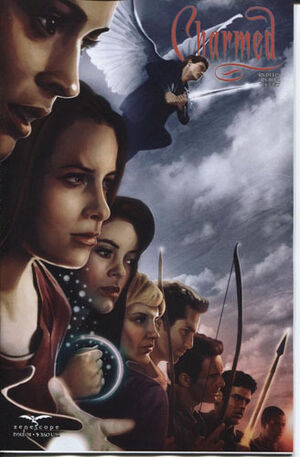 Appearing in "The Power of 300"Edit

Synopsis for "The Power of 300"Edit

Four sisters, bound by love and magic, have had their lives turned upside down many times in the years since they first inherited their powers. Now, they must put aside their differences and work together to take back their world. The Charmed Ones will need to unleash the full strength of the magic that has been growing through their family line for centuries in an epic battle that will bring season nine to its earth-shattering conclusion.

Retrieved from "https://zenescopeentertainment.fandom.com/wiki/Charmed_Vol_1_24?oldid=18191"
Community content is available under CC-BY-SA unless otherwise noted.