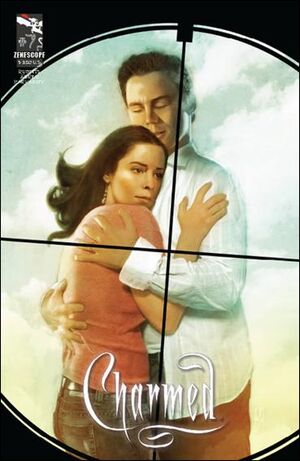 Appearing in "The Heir Up There"Edit

Synopsis for "The Heir Up There"Edit

Piper is distraught when she finds out that her baby daughter has the same orbing power as her part-Whitelighter aunt Paige and worries that it could put her children at risk again as it did when Wyatt was born. Leo decides to make a visit to the Elders for an explanation and is given an intriguing offer but one that would seriously affect his future with Piper. Meanwhile Neena has teamed up with a Darklighter as the two set forth on a Whitelighter killing spree in order to absorb their abilities. Now that she has taken control of the Underworld, Neena has set her sights on the Upper Regions and things are about to heat up!

Retrieved from "https://zenescopeentertainment.fandom.com/wiki/Charmed_Vol_1_7?oldid=14473"
Community content is available under CC-BY-SA unless otherwise noted.