Christopher Mercer is Henry Mitchell, Jr's biological father. He has made three people disappear, the first when he was only fourteen. He got a tattoo on his arm for each person he made disappear.

He is the only known child of Mr. Mercer, a San Francisco crime lord. With the exception of him, his dad, and the son he doesn't know about all members of his family have died violently. He is of an unknown age, but Paige commented that he was barely legal and a veiled conversation about Little Henry's biological mom revealed that she, who was described as being in her teens, was around the same age as he was, whereas Paige, who is in her early thirties, is an older woman.

Christopher has been living in his dad's shadow all his life. He wants to impress his dad, but making three people disappear hasn't done that and neither has anything else he has done. He is waiting for his dad to tell him what he does, but when given an "opportunity" from Paige and Quinn he jumped at the chance and thus provided them the chance to prove him and his father were criminals and protect Little Henry from his biological father's family. 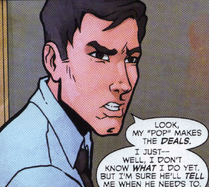 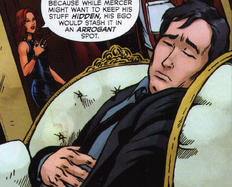 Crossed, Triple-Crossed
Add a photo to this gallery
Retrieved from "https://zenescopeentertainment.fandom.com/wiki/Christopher_Mercer?oldid=12900"
Community content is available under CC-BY-SA unless otherwise noted.