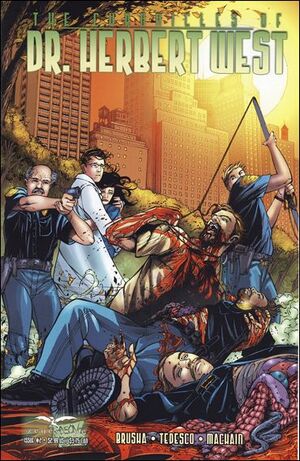 Herbert West's failed experiments have not cured his obsession with reversing death. If anything, he is even more driven than before to perfect his reanimating serum and bring the dead back to life! Continuing his experiments in secret while completing his residency at a local hospital, West is again challenged by his college rival, Justin Stein. But as Stein soon finds out, West has no intention of letting the living stand in his way of bringing back the dead! Don't miss this modern retelling of the classic H.P. Lovecraft story 'Herbert West: Reanimator.'

Retrieved from "https://zenescopeentertainment.fandom.com/wiki/Chronicles_of_Dr._Herbert_West_Vol_1_2?oldid=13622"
Community content is available under CC-BY-SA unless otherwise noted.