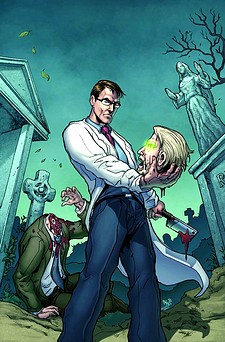 With his relationship with Megan now in shambles, Herbert West continues his quest to perfect the serum that will conquer death. In his new job at a medical research company, West has found a new ally in Eric Moreland, until Moreland learns of West's past failures. A confrontation between the two ends in tragedy or does it? Moreland's grizzly demise nearly becomes West's greatest triumph. The breakthrough turns disastrous as West again fails, this time with decidedly evil results.

Retrieved from "https://zenescopeentertainment.fandom.com/wiki/Chronicles_of_Dr._Herbert_West_Vol_1_4?oldid=12084"
Community content is available under CC-BY-SA unless otherwise noted.