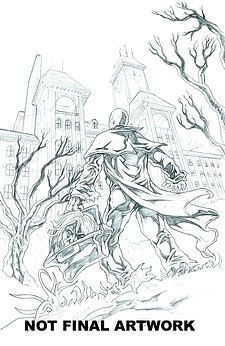 The tension in the saga of Herbert West continues to tighten as the story moves closer to its stunning conclusion. While West's whereabouts remain a mystery even to Megan, a rash of grave robberies and disappearing bodies has Detective Phillips thinking West is experimenting again and Megan knows more than she's admitting. West surfaces to reveal that it's actually the re-animated Eric Moreland who is experimenting on the dead, with an unbelievable plan that is as gruesome as it is horrifying. Can Moreland be stopped?

Retrieved from "https://zenescopeentertainment.fandom.com/wiki/Chronicles_of_Dr._Herbert_West_Vol_1_5?oldid=12085"
Community content is available under CC-BY-SA unless otherwise noted.