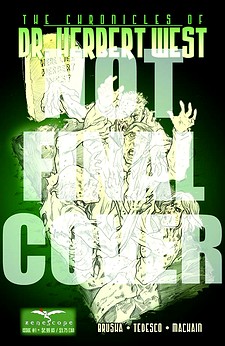 The Herbert West chronicles come to gorily horrifying conclusion as West and Megan race against time to find and stop Eric Moreland and his growing army of re-animated bodies! Following a trail of grave robberies and disappearing bodies, West and Megan are able to sort out the location of Moreland's lab. The suspense builds to a final, intense confrontation between West and Moreland. Death is the only outcome. But is it truly the end to the gruesome experiments started by West?

Retrieved from "https://zenescopeentertainment.fandom.com/wiki/Chronicles_of_Dr._Herbert_West_Vol_1_6?oldid=17105"
Community content is available under CC-BY-SA unless otherwise noted.