Cole is Phoebe's ex-husband and a former demonic mercenary.

On the Show[edit | edit source]

Born in 1885 to a California statesman named Benjamin Coleridge Turner and his demonic wife, Elizabeth, Cole Turner was never going to have a normal life. In 1888, his mother killed his father while he watched and disappeared with him. Cole rose in the ranks of demons to become a demonic mercenary called Belthazar. In 2000, he was given the assignment to find a way to take down the Charmed Ones.

That didn't go as planned and while he caused a lot of trouble for the Charmed Ones, he fell for Phoebe Halliwell and for a while, things improved for him even though he was on the run from bounty hunters and then his powers were stripped. He proposed to Phoebe, but before they could marry, he was tricked by the Seer and ended up getting possessed by the Source. They married and conceived a child, referred to by the Seer as a son. Less than two months later, Cole was vanquished by Phoebe and her sisters and shortly after their son was first stolen by the Seer who claimed he was always hers and then he was killed when the Seer tapped into his powers too much and destroyed everything around her including herself and him except for the Charmed Ones.

He came back from that vanquish, but Phoebe wouldn't take him back and they got a divorce. As he tried harder and harder to win her back using the powers he gained in the wasteland so he could escape, he grew more and more crazed. He was finally recruited by the Avatars, but his first act as an Avatar was to change time so that Phoebe and Piper never met their half sister, Paige Matthews after the death of their older sister, Prue, which ultimately lead to his being vanquished in the alternate reality by the three sisters.

Cole once more escaped from being vanquished, but this time, he got stuck in the void between life and death where he recruited Drake to help Phoebe learn to love, again. While he was there, he also managed to help Piper when she was mortally wounded by a demon while Leo was unavailable.

In the Comics[edit | edit source]

"Each of the Charmed Ones has dated darkness over the years, but no one from the side of evil had more of an affect on our family than Cole Turner. His half-demon side, Belthazor was in constand battle with the human half, Cole, when I, Phoebe, fell in love with him. Our tumultuous relationship led to a marriage performed in a dark ceremony, even though our love was pure. Unfortunately, that love was not enough to save Cole when his dark side took control and we were forced to vanquish him for good."

The All or Nothing﻿[edit | edit source]

In The All or Nothing, Cole had apparently, once more, escaped his confines and was able to help approach Piper with an offer of help.

Cole always seems to know more than he lets on and in The Charmed Offensive, he confronted the ghosts of Grams and her daughter, Patty, when they told Patty's three youngest daughters that Prue was gone. Patty told him if he wants their help, he needs to find Prue.

Instead of trying to locate Prue, Cole is watching Phoebe. When Phoebe finds her Cupid husband's living family, he tries to stop her from introducing Coop to the Coopersmiths. At the end of the issue, he tells Patty that he was doing it to protect Phoebe, because Coop could destroy his family.

Cole goes to Alexi, a seer he knew at some point in the past, asking her to help him find something. He doesn't tell her what, but assumes she knows since she's a firestarter. She looks into it and although Cole can see nothing in the mirror she looks through she tells him that he needs to look in the place of "her" namesake. Cole leaves and misses seeing Rennek show up.

The Heavens Can Wait[edit | edit source]

When Phoebe went downstairs to check on Cole and Coop, it appeared that the two of them were in a staining contest. Later, Cole was the one to let Phoeb know that she was pregnant with her second child. He also told her that he was going to join Prue in Salem. 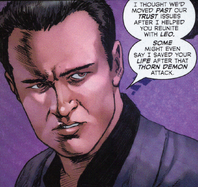 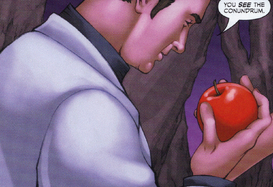 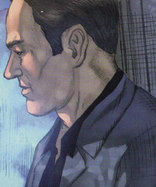 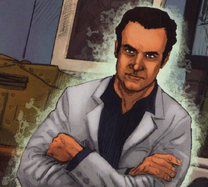 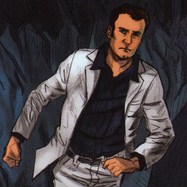 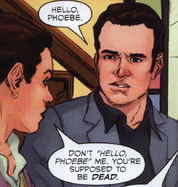 Family Shatters
Add a photo to this gallery

Retrieved from "https://zenescopeentertainment.fandom.com/wiki/Cole_Turner?oldid=17121"
Community content is available under CC-BY-SA unless otherwise noted.