Coop is short for Cupid. It is unknown whether this is actually his name or if he even has a name as the original cupid told them to call him cupid for lack of something better. When he first met Phoebe, he told her that his mission was to help her find love and he tried to set her up with a coworker, going so far as to be the Cyrano de Bergerac to Michael's Christian. That didn't stop him from falling for Phoebe and when they learned that their relationship wasn't actually forbidden, they started dating. They were married by the Angel of Destiny. Approximately nine months later, they had a daughter whom they named Prudence Johnna Halliwell.

It is learned in Cupid's Harrow, that Coop's last name most likely is Coopersmith and that, at some point in the past, Coop's family were miners. The Coopersmith family has a tradition of making a cake shaped like the Coopersmith Mine for every special occation. It is possible that Coop is short for Coopersmith and that he was called that because he died before he was named. If this is true then it is not something Coop knew as he explained it as being short for Cupid. It could also be a combination of the two.

"Several men followed Cole, but none of them could fill the hole in my heard until the Elders assigned a Cupid named Coop to help me find love again. What neither of us realized was that the Elders had always intended for Coop to be that love."

Coop was staying home with Little Prue, while Phoebe went back to work for the first time since their daughter's birth. He watched, amused, as she looked for her keys and informed her that he wasn't behind her very cupid like return to their home.

Coop showed up at Phoebe's publicity event at the park to give her some moral support since he knew how much she was dreading it. When he arrived he saw her talking to Romeo and Juliet and identified them to her.

Coop showed up at the opening of Halliwell's, his sister-in-law, Piper's restaurant with her husband, Leo, and Paige's husband, Henry. He was part of the toast to Piper and her success at the end.

Coop was assigned to collect a new recruit. In order to do this, he attends the funeral of an infant girl. He then returns to Cupid's Temple where he, along with fellow cupid, Kama, release the little girl's soul and turn her into a Cupid where she is free to fly. The whole thing has taken it's tole on Coop, as he thinks of how he would feel if he lost PJ and wonders about the family he never knew. When he reveals this to Phoebe, she finds his family and gets Coop an introduction. While helping his distant relative, Mitchell Coopersmith, he learns about a family tradition that might date back to the time of his own parents and tries to help Mitchell with pre-wedding jitters by using his powers on him. This leads to trouble which must be fixed. Ultimately, the situation helps Coop come to appreciate the family he has through Phoebe, PJ, and Phoebe's family﻿.

Although Coop is not affected by Piper's freeze, he opted to stay down stairs sitting across from Cole while the sisters were up in the attic trying to figure things out. When Phoebe went downstairs to check on them, she found them sitting in silence. Later he would have no doubt learned from Phoebe that they were going to have their second child, since Cole informed Phoebe that she was pregnant. 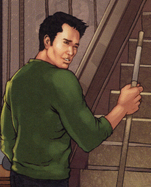 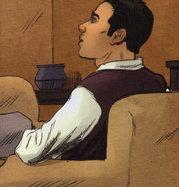 Four's Company
Add a photo to this gallery
Retrieved from "https://zenescopeentertainment.fandom.com/wiki/Coop?oldid=13771"
Community content is available under CC-BY-SA unless otherwise noted.