Elise first met Phoebe Halliwell when Phoebe turned in a column for her advise columnist, claiming she was sick. When that advise columnist quit The Bay Mirror shortly after, Elise hired Phoebe to do the column.

Elise worked Phoebe hard, but sometimes she looked the other way with all the family emergencies Phoebe had. She knew Phoebe was good at what she did and as long as Phoebe kept at it, Elise generally was okay with it for a little while.

When Phoebe needed some time off, Elise hired a ghost writer for her, but somehow, Phoebe seemed to spend more time in the office while she had that ghost writer.

Upon realizing that Little Prue is not going to let her go to work, Phoebe comments that Elise was not going to like this. On that day, Elise made plans for Phoebe that would come into play later.

Phoebe and Mika discuss how legal it is for Phoebe to be marrying people when she had no part in the plan Elise worked out during Charmed Lives and Phoebe wasn't even there when they signed her up online to be a minister of the church of light and love. Phoebe finally goes along with it, but Elise doesn't realize it's because Romeo and Juliet showed up to be married by a Charmed One and convinced Phoebe that she should do this.

Elise has hatched a new scheme and has Phoebe doing a live web chat. When Phoebe gets caught up in a search to discover if Cal Greene will harm Mika, Elise reluctantly tells her about a girl who came to her after Cal beat her up and of the threats Cal made, including a baseball to Elise's windshield. There was never anything Elise could prove, but she knew it was him.

After Phoebe goes to check on Mika, Elise confonts Cal and he attacks her. Phoebe, with Piper and Paige, is able to get to her in time to save her life. Once Paige has healed Elise, Phoebe finally tells her about her secret. Elise has a lot to think about as a whole new world has been opened up to her.

Elise comes in as Phoebe is trying to find something about Coop's family. She has an assignment for Phoebe to go to the wedding of Mitchell Coopersmith and Bree Holcombe. When she sees what Phoebe is doing, she tells her that she should work on her column instead, until the paper in her hand slips out of her hands and triggers a premonition. At that point, she is fine with Phoebe doing both, since finding Coop's family seems to coincide with what Elise wants her to do. 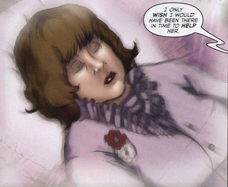