Father O'Malley was a priest during his lifetime. His soul is currently trapped in Inferno.

Mercy enters Father O'Malleys booth to confess. She tells him that it has been 10 years and 6 months since her last confession and that she killed a man today. When the priest asks for the man's name, Mercy replies with his own. Mercy proceeds to shoot Father O'Malley and tells him why she was sent to kill him: 6 years ago Father O'Malley was a character witness to one of his parishioners who was charged with the murder of 3 children. After the man got away with his crime, the childrens' parents hired Mercy to kill the priest.

Sela directs Mercy to an abandoned church at Fifth and South. She informs Mercy that there is someone called the Priest who, although not willing, may be able to help her.

Mercy finds the Priest in the confession booth. When she demands him to tell her the whereabouts of Brian Watson, the Priest reveals himself to be Father O'Malley. He tries to kill Mercy to repay her for murdering him and trapping him in Inferno. After Mercy kills his demon minions and threatens him, Father O'Malley confesses that he doesn't know where Brian Watson is. 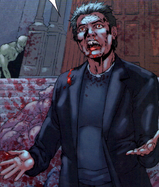 Inferno 3
Community content is available under CC-BY-SA unless otherwise noted.