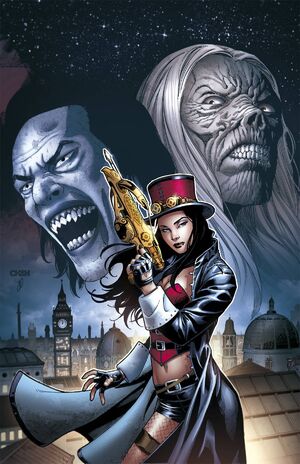 One of Zenescope's most popular characters, Liesel Van Helsing, stars in this special re-imagining of a classic!

In the early 19th century, Van Helsing loses someone she cares deeply about and the inventor in her triggers her to finish the time machine she had been working on. But when things backfire, Liesel is sent far into the future and comes face to face with a race of beings more terrifying then any vampire she's ever faced. Now she must escape the terrifying Morlocks and find a way back home!

The final 10th Anniversary One-Shot is here and it's not to be missed!

Retrieved from "https://zenescopeentertainment.fandom.com/wiki/Grimm_Fairy_Tales:_10th_Anniversary_Special_Vol_1_6?oldid=16578"
Community content is available under CC-BY-SA unless otherwise noted.