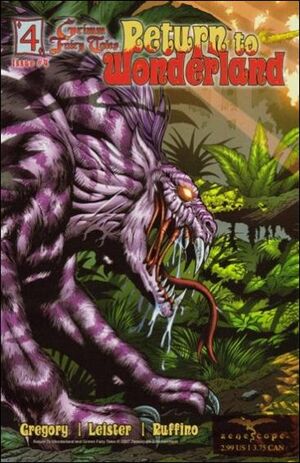 Calie’s journey into the twisted world continues here as Alice’s teenage daughter finds herself lost in a world where nothing makes sense and only terror awaits. Calie stumbles upon the most malicious kingdom one could ever imagine, the kingdom that belongs to the psychotic Queen of Hearts. But the Queen is not even the worse of Calie’s troubles because the Cheshire Cat has found his prey and is ready to claim his next victim.

Retrieved from "https://zenescopeentertainment.fandom.com/wiki/Grimm_Fairy_Tales:_Return_to_Wonderland_Vol_1_4?oldid=11900"
Community content is available under CC-BY-SA unless otherwise noted.