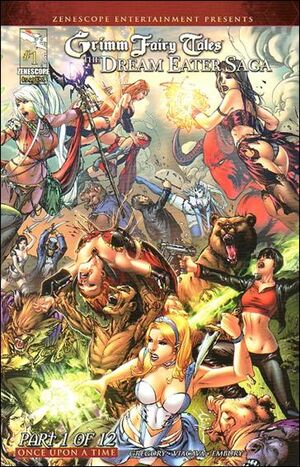 Appearing in "Once Upon a Time"Edit

Synopsis for "Once Upon a Time"Edit

The Zenescope EVENT of the year kicks off here in this oversized issue! The Dream Eater has been released and stalks the earth searching for its first victim while the heroes and villains of the Grimm Fairy Tales universe prepare themselves for what could very well be the end of them all. Part One of the Grimm Fairy Tales Dream Eater Saga crossover event starts here with a shocking death that will rock your world!

Retrieved from "https://zenescopeentertainment.fandom.com/wiki/Grimm_Fairy_Tales:_The_Dream_Eater_Saga_Vol_1_1?oldid=13615"
Community content is available under CC-BY-SA unless otherwise noted.