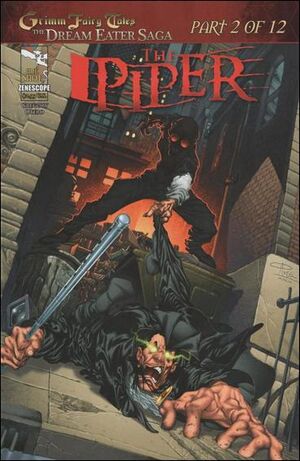 What are the words I'm looking for here? Oh, I know... It's time to pay the Piper.

In another world the Piper was a feared and powerful soldier of the Dark One. His flute brought the strong and the weak to their ends in both this world and the world of Myst. But with the Dream Eater loose on the earth the hunter has now become the hunted and the Piper will learn the hard lesson that no matter how far he runs, no matter where he hides, he can not escape the Dream Eater.

Retrieved from "https://zenescopeentertainment.fandom.com/wiki/Grimm_Fairy_Tales:_The_Dream_Eater_Saga_Vol_1_2?oldid=11961"
Community content is available under CC-BY-SA unless otherwise noted.