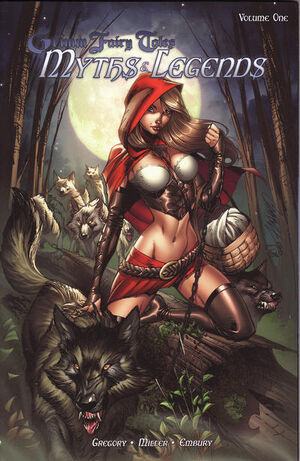 Written By Raven Gregory Artwork By David Miller Colors by Jason Embury Cover A By Artgerm After the milestone events of Grimm Fairy Tales #50 creatures from the realm of Myst have escaped into our world. Captured by the evil Baba Yaga for her sinister plans they are about to cause major havoc on earth. Britney, our hero from Grimm Fairy Tales #1 is back, working in a treatment center for adolescents. Little does she know that something from another realm has caught her scene and will stop at nothing to find and destroy her before her true purpose is revealed. From the creators of Grimm Fairy Tales and the Wonderland trilogy comes the latest ongoing best selling series from zenescope entertainment.

Retrieved from "https://zenescopeentertainment.fandom.com/wiki/Grimm_Fairy_Tales_Myths_%26_Legends_(TPB)_Vol_1_1?oldid=17111"
Community content is available under CC-BY-SA unless otherwise noted.