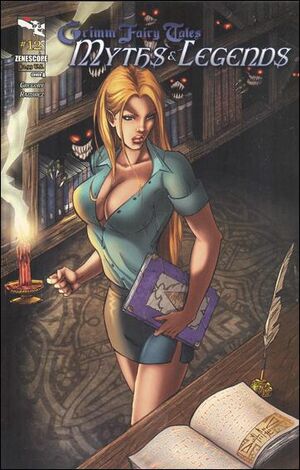 A brand new story arc begins here! When Jeff finally moved away from his abusive home life, he thought he had escaped the cycle of violence that was his life.

But when his younger brother Drew, commits suicide, Jeff must come back to the one place where he thought he would never return. Meanwhile forces not of this world are slowly shaping Jeff's destiny in terrifying ways... Forces that may very well bring out the Beast within him. The BEAUTY and THE BEAST story arc starts here in what will become one of the most talked about story lines in the Grimm Fairy Tales Universe.

Retrieved from "https://zenescopeentertainment.fandom.com/wiki/Grimm_Fairy_Tales_Myths_%26_Legends_Vol_1_12?oldid=13618"
Community content is available under CC-BY-SA unless otherwise noted.