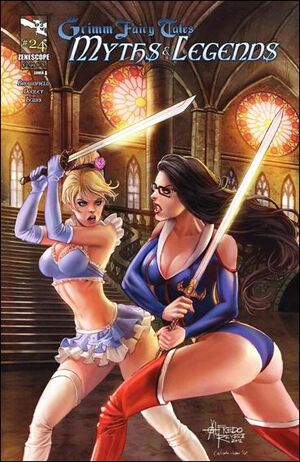 Appearing in "The Summoning: Part 3"Edit

Synopsis for "The Summoning: Part 3"Edit

'The Summoning' story arc continues here! Sela, Samantha and Red Riding Hood race to prevent the ritual from being completed, but even their combined powers may not be enough when the trio finds itself face to face with Cindy, the Sea Witch, Venus and the Beast! Meanwhile, as Helios is finally set free on Earth, his uncontrollable power and rage will finally be unleashed. Don't miss the issue that begins the evolution of the Grimm Universe!

Retrieved from "https://zenescopeentertainment.fandom.com/wiki/Grimm_Fairy_Tales_Myths_%26_Legends_Vol_1_24?oldid=14737"
Community content is available under CC-BY-SA unless otherwise noted.