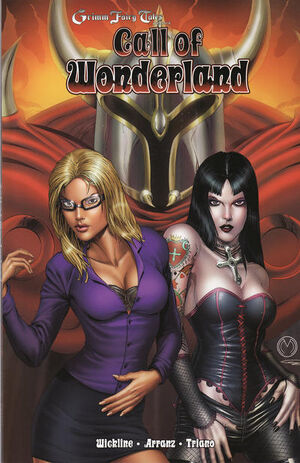 I didn't have the easiest of childhoods. His stories allowed me a mental refuge when physical escape from the real world wasn't possible. I felt protected by his words.

The Jabberwocky has been defeated. The Queen of Hearts is dead and Wonderland is in a state of chaos with no ruler on the throne. Enter the Red Knight who is determined to destroy all of Wonderland and the world at large by unleashing a deadly ancient force long thought to be gone. Meanwhile on earth, a literary student researching Lovecraft will discover a long forgotten secret that could save or damn us all. Don't miss out on this incredible mini-series that sets the stage for the upcoming Wonderland ongoing series!

Retrieved from "https://zenescopeentertainment.fandom.com/wiki/Grimm_Fairy_Tales_Presents:_Call_of_Wonderland_(TPB)_Vol_1_1?oldid=18264"
Community content is available under CC-BY-SA unless otherwise noted.