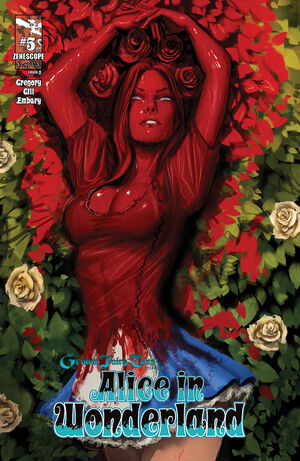 The Queen of Spades stands fully revealed as the grand manipulator behind the events of Alice's escape from the Jabberwocky. But what are her intentions?

The answer is revealed and it will set Alice on a path to insanity from which she may never return… Elsewhere the armies of Wonderland are closing in on Alice and in order to prevent the madness of Wonderland from escaping into our world, Alice will have to lead an army of her own against the very creature she fears the most. Zenescope's twisted version of Wonderland continues! Follow us back down the rabbit hole!!

Retrieved from "https://zenescopeentertainment.fandom.com/wiki/Grimm_Fairy_Tales_Presents_Alice_in_Wonderland_Vol_1_5?oldid=14835"
Community content is available under CC-BY-SA unless otherwise noted.