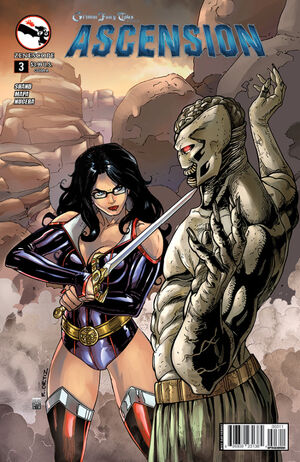 WHO WILL DIE AT THE HANDS OF THE NEW GODS? Death has struck the Grimm Universe, and nothing will ever be the same. As the Being continues his culling, Sela and Van Helsing scramble to find a way to stop him and the New Keepers. Things go awry, though, when Jacqueline loses control of her powers and Julian reveals his true loyalties. A battle for the fate of the world is coming, and not everyone will make it out alive!

Retrieved from "https://zenescopeentertainment.fandom.com/wiki/Grimm_Fairy_Tales_Presents_Ascension_Vol_1_3?oldid=15899"
Community content is available under CC-BY-SA unless otherwise noted.