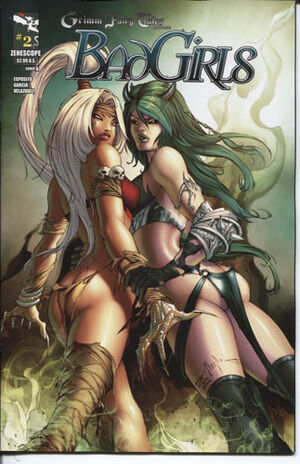 What happens when the most evil and powerful female characters in the Grimm Universe join forces? You'll find out in this new miniseries that brings together an all star cast of girls that were born to be bad. Baba Yaga, the Goblin Queen, and the Queen of Spades are a titanic trio, but there may be something that stop them in their quest for power? Don't miss the baddest series in the history of Grimm Fairy Tales.

Retrieved from "https://zenescopeentertainment.fandom.com/wiki/Grimm_Fairy_Tales_Presents_Bad_Girls_Vol_1_2?oldid=14846"
Community content is available under CC-BY-SA unless otherwise noted.