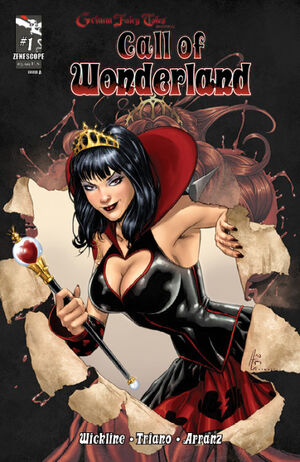 I didn't have the easiest of childhoods. His stories allowed me a mental refuge when physical escape from the real world wasn't possible. I felt protected by his words.

The COUNTDOWN to the brand new WONDERLAND ongoing series begins here!!! The Jabberwocky has been defeated. The Queen of Hearts is dead and Wonderland is in a state of chaos with no ruler on the throne. Enter the Red Knight who is determined to destroy all of Wonderland and the world at large by unleashing a deadly ancient force long thought to be gone. Meanwhile on earth, a literary student researching Lovecraft will discover a long forgotten secret that could save or damn us all. Don't miss out on this incredible mini-series that sets the stage for the upcoming Wonderland ongoing series! Featuring covers by Zenescope superstar artist Anthony Spay and long time Wonderland fan favorite Rich Bonk.

Retrieved from "https://zenescopeentertainment.fandom.com/wiki/Grimm_Fairy_Tales_Presents_Call_of_Wonderland_Vol_1_1?oldid=18263"
Community content is available under CC-BY-SA unless otherwise noted.