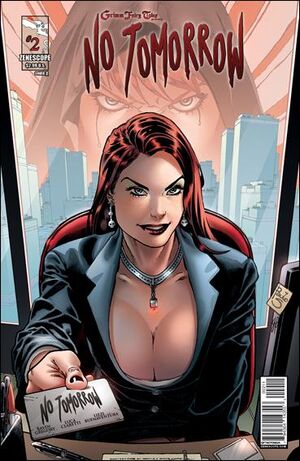 After surviving his near brush with death, Patrick has begun noticing peculiar appearances of the mysterious pale woman he saw before the destruction of his office building. Appearances that defy all rules of logic and possibility. Appearances across the world where tragic events have left an ever growing trend of death and murder. But as he learns more about Keres past he will come to realize that if you look for death, then death will come looking for you. From the creator and writer of the Wonderland Trilogy, FLY and THE DREAM EATER SAGA. Once Death has chosen you there is nowhere to run, nowhere to hide, no escape and...NO TOMORROW!

Retrieved from "https://zenescopeentertainment.fandom.com/wiki/Grimm_Fairy_Tales_Presents_No_Tomorrow_Vol_1_2?oldid=15711"
Community content is available under CC-BY-SA unless otherwise noted.