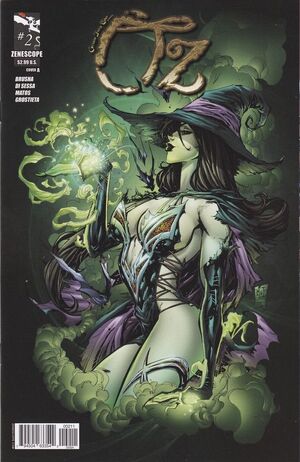 Trapped in Oz and hunted by the armies of the fallen Wicked Witch of the East, Dorothy finds allies in Glinda, the good witch of Oz, and the lion named Thorne. Together they embark on a quest for the veridian scepter, an artifact that can both free Oz from the tyranny of the Wicked Witch, and also send Dorothy home. All that stands in their way is the Wicked Witch of the West and her army of deadly warriors, flying monkeys and demon dogs.

Retrieved from "https://zenescopeentertainment.fandom.com/wiki/Grimm_Fairy_Tales_Presents_Oz_Vol_1_2?oldid=15062"
Community content is available under CC-BY-SA unless otherwise noted.