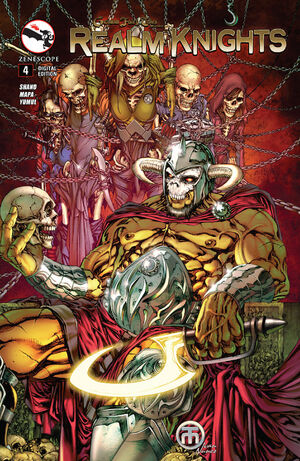 The high-octane conclusion to the greatest Grimm Fairy Tales team-up of all time! The lines are drawn as Cronus and his army of Hydra have taken control of Mount Olympus. The world’s only hope rests on the shoulders of the Realm Knights, who have been divided and conquered! Can these fairy tales and gods live up to their legend, or will they be snuffed out by the King of Titans?

Retrieved from "https://zenescopeentertainment.fandom.com/wiki/Grimm_Fairy_Tales_Presents_Realm_Knights_Vol_1_4?oldid=17119"
Community content is available under CC-BY-SA unless otherwise noted.