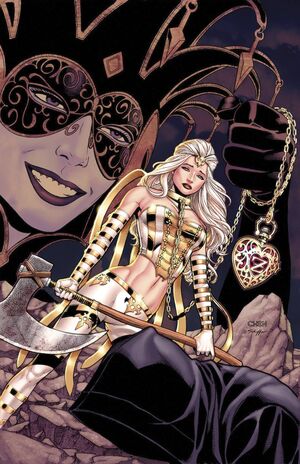 The Age of Darkness has descended and the four mystical realms surrounding Earth have since merged with it. And Calie, Wonderland's own "White Queen," is a pawn in the Dark Queen's ultimate plans. And while Calie opposes those plans, she finds herself in a conundrum as the Dark Queen holds a very powerful bribe over Calie's head.

Wonderland enters the Age of Darkness... and nothing can ever be the same!

Retrieved from "https://zenescopeentertainment.fandom.com/wiki/Grimm_Fairy_Tales_Presents_White_Queen_Vol_1_1?oldid=17377"
Community content is available under CC-BY-SA unless otherwise noted.