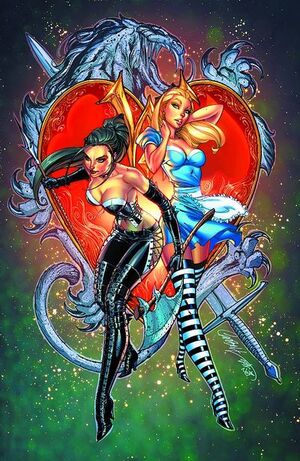 Calie Liddle is BACK! And the series that every Zenescope fan has been waiting for is finally here. When Calie escaped from Wonderland she wanted to believe she was finally free from the realm of madness. She wanted to believe she could live a normal life. But she was wrong. Now Calie and her daughter Violet are on the run from the realm of madness. Meanwhile, a child returns from a carnival with a special hat that will mean murder and chaos for all those who cross his path. The Wonderland ongoing series begins NOW! Featuring covers by superstar artist J. Scott Campbell, Ebas, and many more!

Retrieved from "https://zenescopeentertainment.fandom.com/wiki/Grimm_Fairy_Tales_Presents_Wonderland_Vol_1_1?oldid=16740"
Community content is available under CC-BY-SA unless otherwise noted.