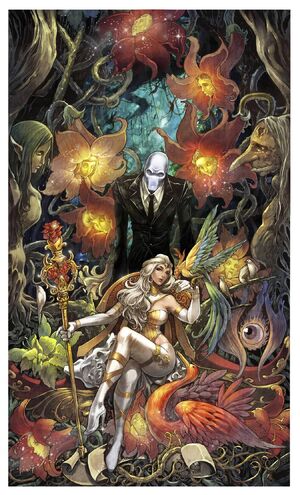 Wonderland has been remade as a land of peace under the reign of the White Queen, Calie Liddle... but at its brightest, the sun casts the darkest shadows. A forgotten evil of Wonderland emerges and begins leaking through the barrier between Earth and Wonderland, and it is up to Calie, Cheshire, and the White Rabbit to stop it before Wonderland falls again... and, this time, dragging Earth with it.

Retrieved from "https://zenescopeentertainment.fandom.com/wiki/Grimm_Fairy_Tales_Presents_Wonderland_Vol_1_27?oldid=17063"
Community content is available under CC-BY-SA unless otherwise noted.