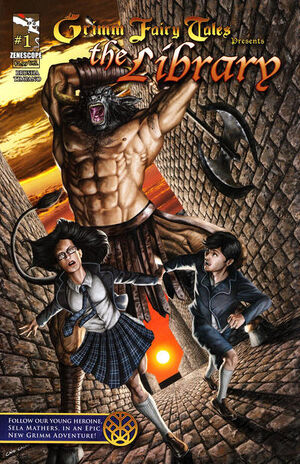 When fourteen year old Sela Mathers discovers an ancient magic book in a condemned library her and her younger brother cast a spell that unlocks the amazing worlds and characters from the books and novels around them.

Grimm Fairy Tales presents an all new miniseries that explores an alternate reality of the Grimm Universe. Hercules, Robin Hood and Pecos Bill all come magically to life. But heroes aren't the only characters in stories. Villains too are affected by the magic spell and soon the children find themselves in a race against time to reverse the spell as evil characters from all of literature threaten to take over the world. Their only chance lies with the heroes they've brought to life. But even that may not be enough to stop the Frankenstein, Baba Yaga and the Wicked Witch of the West!

Retrieved from "https://zenescopeentertainment.fandom.com/wiki/Grimm_Fairy_Tales_Presents_the_Library_Vol_1_1?oldid=16913"
Community content is available under CC-BY-SA unless otherwise noted.