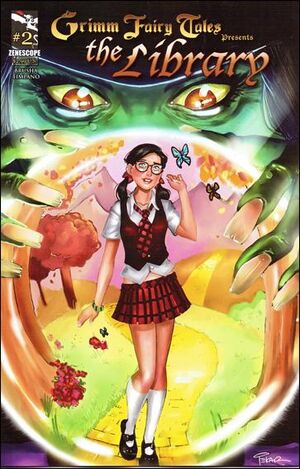 Jurassic and mythological worlds collide in this can’t miss issue!

Transported to the imaginary worlds that they have opened in the Library, Sela and her brother struggle to escape the dangers they encounter there…the dangers of ancient Greece and earth’s Jurassic period that have magically come to life. Just when the two have given up, hope help arrives in the form of the greatest hero of mythology. But will even Hercules have the strength to save them from the combined might of a Minotaur and a T-Rex? *All ages*

Retrieved from "https://zenescopeentertainment.fandom.com/wiki/Grimm_Fairy_Tales_Presents_the_Library_Vol_1_2?oldid=16911"
Community content is available under CC-BY-SA unless otherwise noted.