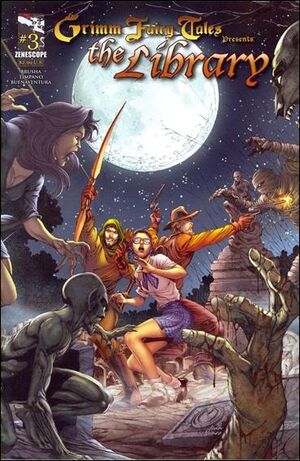 Unlocking the magic spell book has brought the Wicked Witch to life and now she plans on staying that way.

The only way to put her back in her book is to reverse the spell, and that’s just what Sela plans to do. The only problem is the book and the key to its lock have been sucked into the portals and living worlds of other books. In order to get them back, Sela will have to venture into a world full of monsters and her brother will have to take a trip into one of the greatest adventure stories ever told. Classic tales, monsters, villains and heroes come to life in this epic Grimm Fairy Tales spinoff!

Retrieved from "https://zenescopeentertainment.fandom.com/wiki/Grimm_Fairy_Tales_Presents_the_Library_Vol_1_3?oldid=10894"
Community content is available under CC-BY-SA unless otherwise noted.