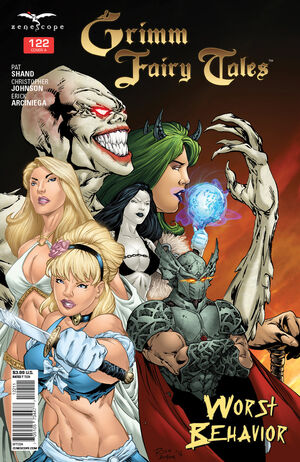 The penultimate storyline of Grimm Fairy Tales begins! The Arcane Acre students rebel against their teachers in order to reunite with Lance and Skye. However, with Hailey missing and Ali in trouble, will their efforts prove fruitless? Also, Bloody Bones has made a dangerous new ally... and preparations for the final assault against the Nexus begin.

Retrieved from "https://zenescopeentertainment.fandom.com/wiki/Grimm_Fairy_Tales_Vol_1_122?oldid=17073"
Community content is available under CC-BY-SA unless otherwise noted.