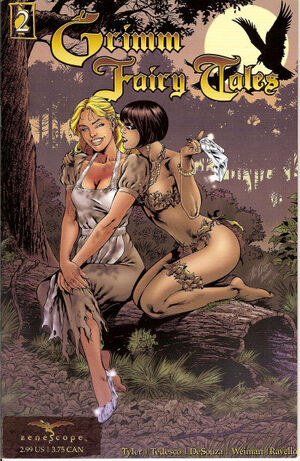 All of your dreams can come true. That is if you're willing to make one small sacrifice.

Cindy, an awkward-looking college student, decides she will re-invent herself by joining a sorority--Sigma Beta. After walking away from filling out the sign up sheet, she hears the sisters making fun of her. When they notice that she heard them, they criticize Cindy to her face, telling her she is not Sigma Beta material. In an attempt to distract herself, she goes to a lecture on fairy tales from Sela Mathers. At the lecture, Sela tells the story of Cinderella.

In the cellar, Cinderella is haunted by the voices of cruel spirits. One seemingly less cruel spirit, who tells Cinderella to think of her as a fairy godmother, offers to help Cinderella by giving her a new life of happiness. The spirit asks for Cinderella's soul in exchange--Cinderella will serve the spirit in the afterlife after she dies. Cinderella, in addition to happiness, also requests revenge on the step-family that has treated her cruelly.

Cinderella goes to the ball and has a wonderful night with the prince. She is forced to leave at midnight, losing her glass slipper in the process, and return to her life of toil. The spirit appears to her more corporeally and tells her that things will work out--the prince is looking for the woman who so enchanted him, and will be there shortly.

That evening, the stepmother and stepsisters are outdoors, discussing the prince, when the skies grow ominously dark. They are then pursued by a murder of crows. The mother makes it inside and bars the door, but the sisters are pecked to death. However, her relief is short lived. She falls into the cellar and twists her leg. She demands Cinderella help her, but instead Cinderella closes the trap door and leaves her stepmother stuck in the darkness.

The prince arrives looking for the woman whose foot fits in the glass slipper. Upon discovering that this is Cinderella, he whisks her away to his palace.

Cindy is the only person left in the audience as Sela closes her book. She tells Sela that she wishes she could get what Cinderella got: a new life where she is beautiful and popular. Sela, using Cindy's name (despite the latter having never introduced herself to the former), tells her that she can help. As crows look on ominously, Sela tells Cindy that all her dreams come true in exchange for a small sacrifice.